Welcome to Narismiral Village, home to the very first and true Second Life village dedicated to Sergals, Nevreans, and others from the Vilous lore! We are a relaxed group of indivduals that hangout, roleplay, and just enjoy our time in the Village. We have homes for rent if you would like to become part of the Village and a market that we will see to promote Vilous related products. Join our Telegram group which is bridged to in-world so you can carry on a discussion with individuals on the sim. 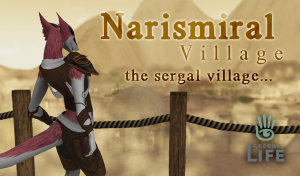 The idea of creating a Sergal only sim within SecondLife was suggested back in the late part of 2014. It wasn’t until the beginning of spring of 2015 when they decided to take on the task of putting the sim together.

Krysune and Scharres bought a quarter plot and started putting the sim together mainly with whatever old canon lore was currently out there, portraying the lore as accurately as possible to the best of what they knew would be visually correct. It took them about a week and a half to put everything together, some from scratch, but most coming from the marketplace. They found anything that closely resembled anything true to canon before creating their own structures.

The sim was first made public two days after completion with quite a good turn out. Many Sergals slowly trickling in as many people fell in love with how the sim looked, and how closely it resembled the literature that was currently out there. It was simply the best portrayal of a small part of Tal on SecondLife. 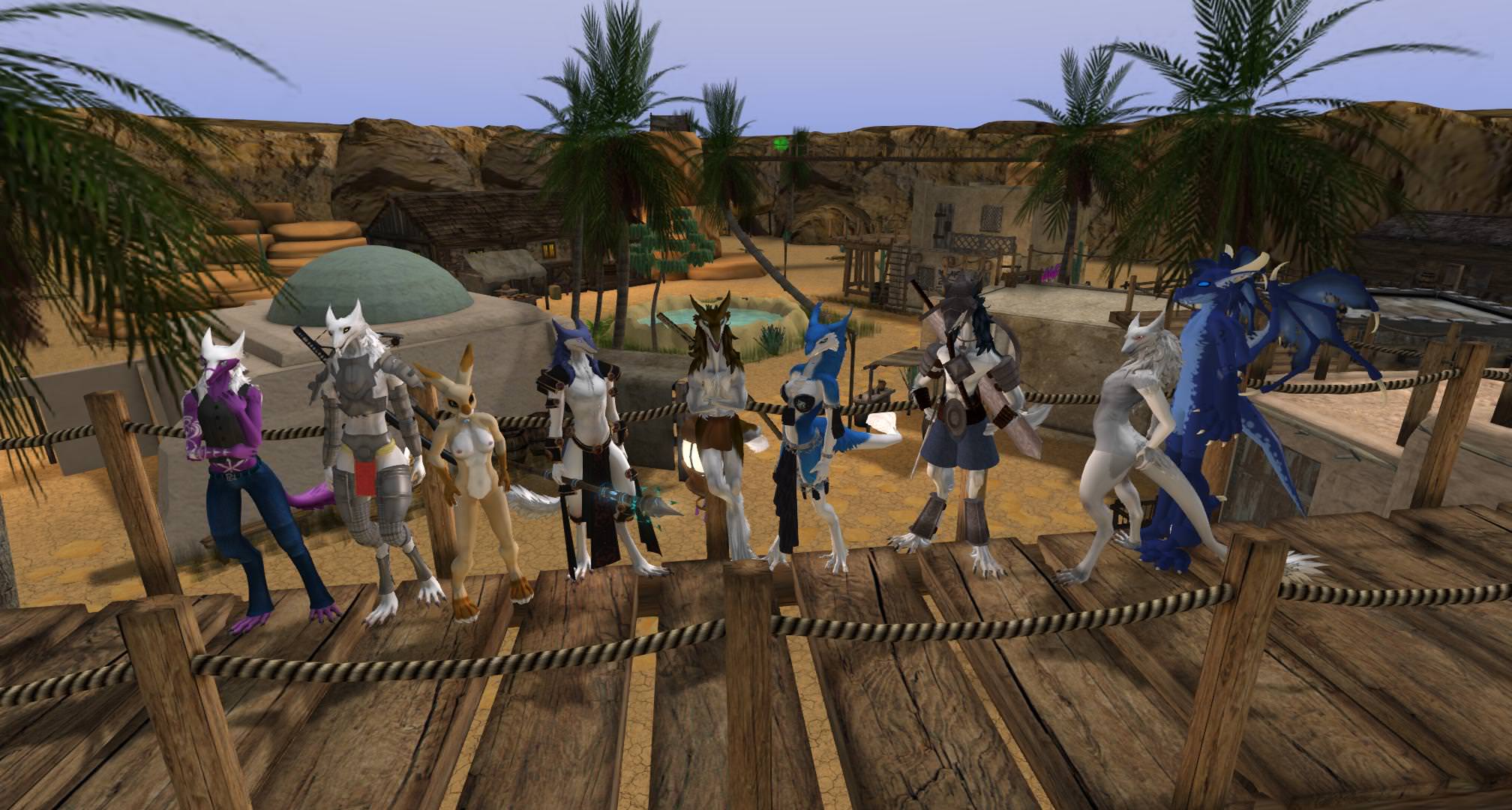 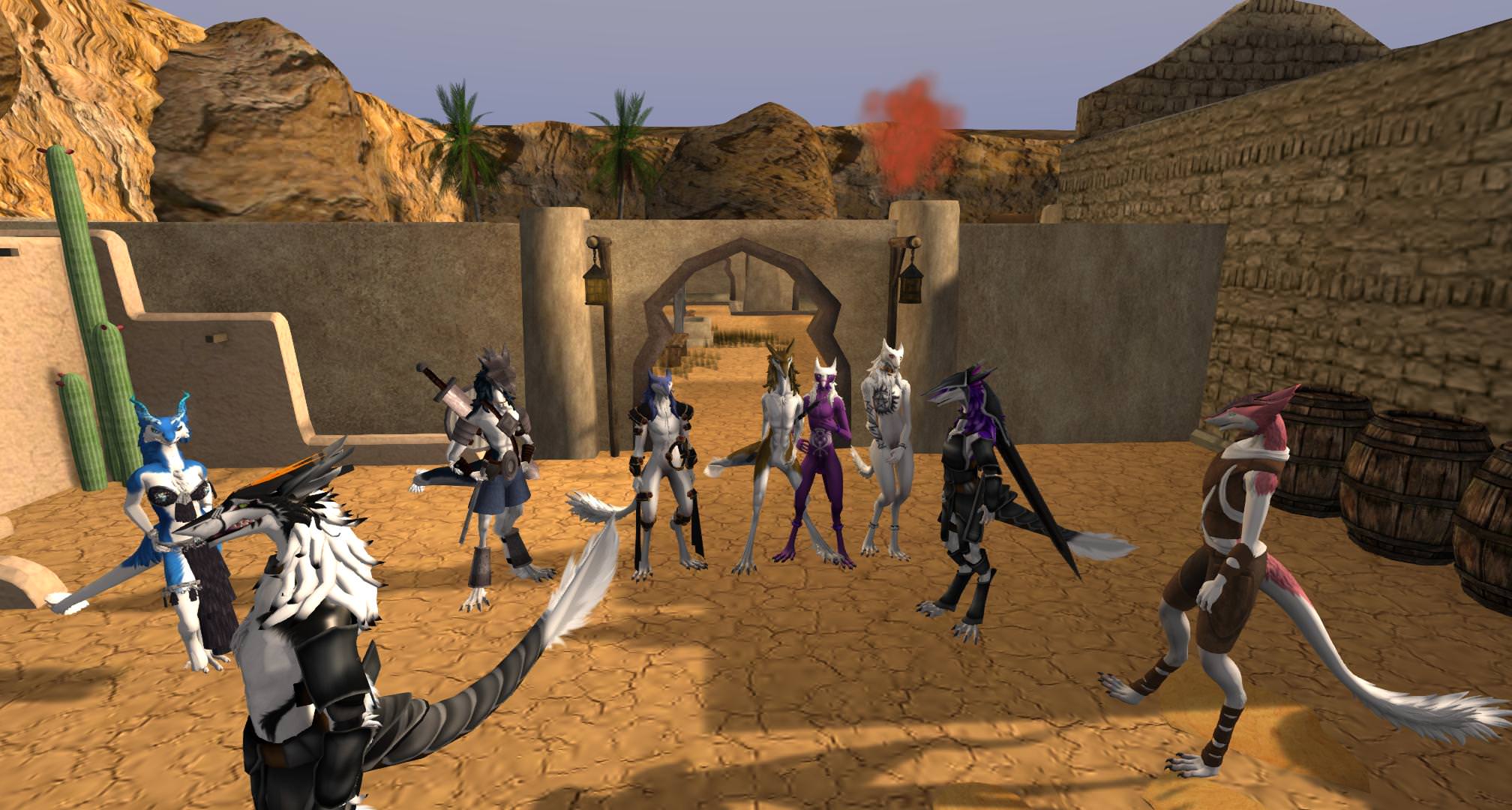 After a few months, the sim started to grow substantially to where the quarter plot they had could not support the amount of people it was getting, and the support they were receiving was giving them the opportunity to go ahead and consider purchasing a half-sim.

The biggest push were people wanting to rent on the parcel, and with them expanding to a half-sim, this gave them the chance to start offering house rentals. The rentals took off fairly quickly in the beginning, but soon tapered off as people were wanting actual allocated plots, which was not possible due to the amount of primage the half-sim had. Regardless, the house rentals are what really helped support the sim to continue catering to the suggestions that kept piling in.

The half-sim was such a enormous project that it went through several difference phases. Ongaaf, was able to provide project modeling assistance along with managing day-to-day sim operations, and Aesop he mainly provided much needed financial assistance for the sim during it’s initial move and thereafter.

The project took roughly three days to finish as most was a drag and drop from the old sim onto the new sim. Mostly, they spent the time moving things around into different locations, and building new structures based on the suggestion note cards that were given to the visitors to help add more immersion within the sim. Throughout the time of having the sim though Ongaaf, dedicated his time to modeling several newer structures, such as, extra housing, bath house, museum, teleport hub, entrances, and outer-skirt structures. All of these structures were one of many suggestions from the visitors that gave their input. 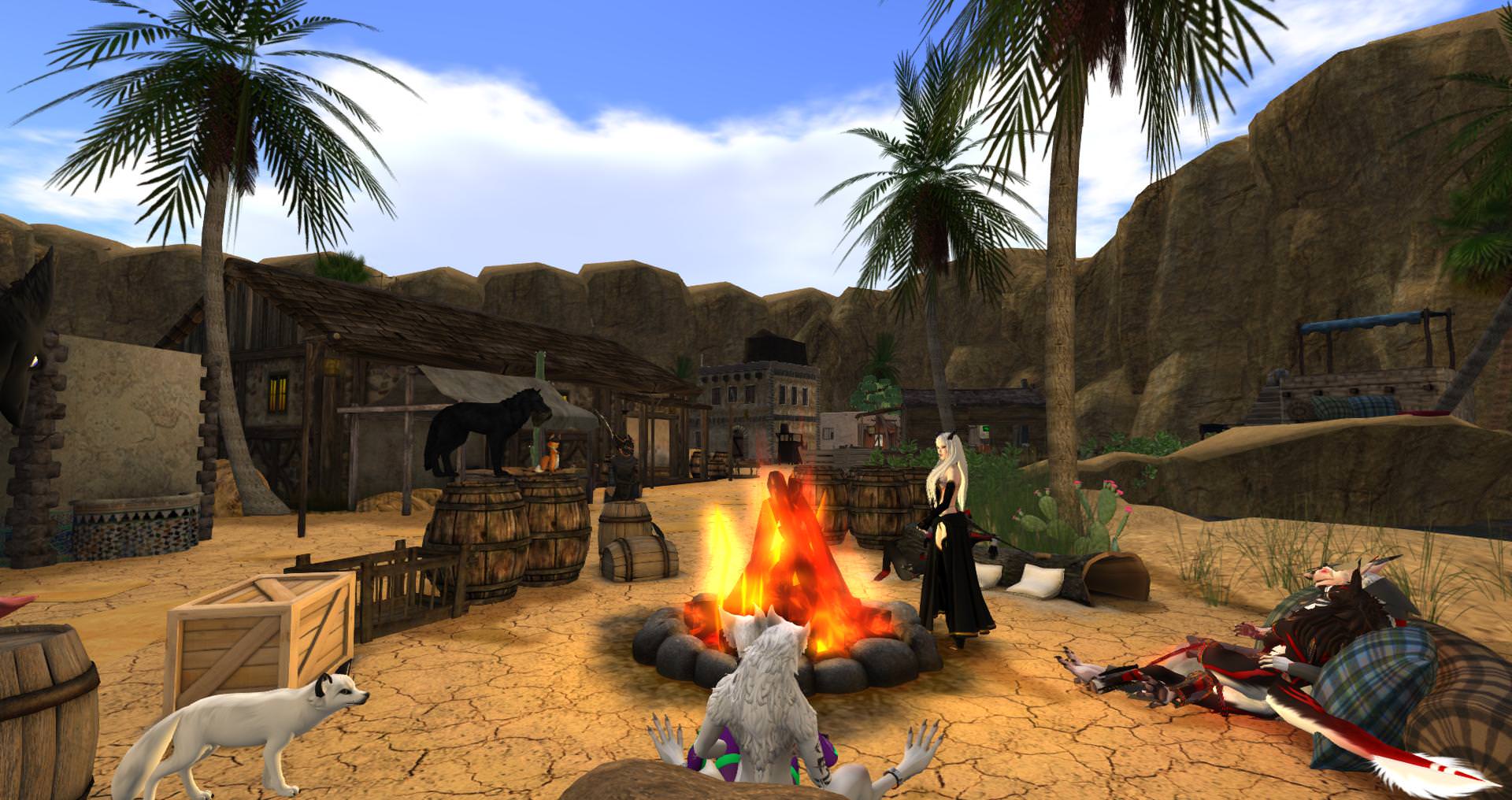 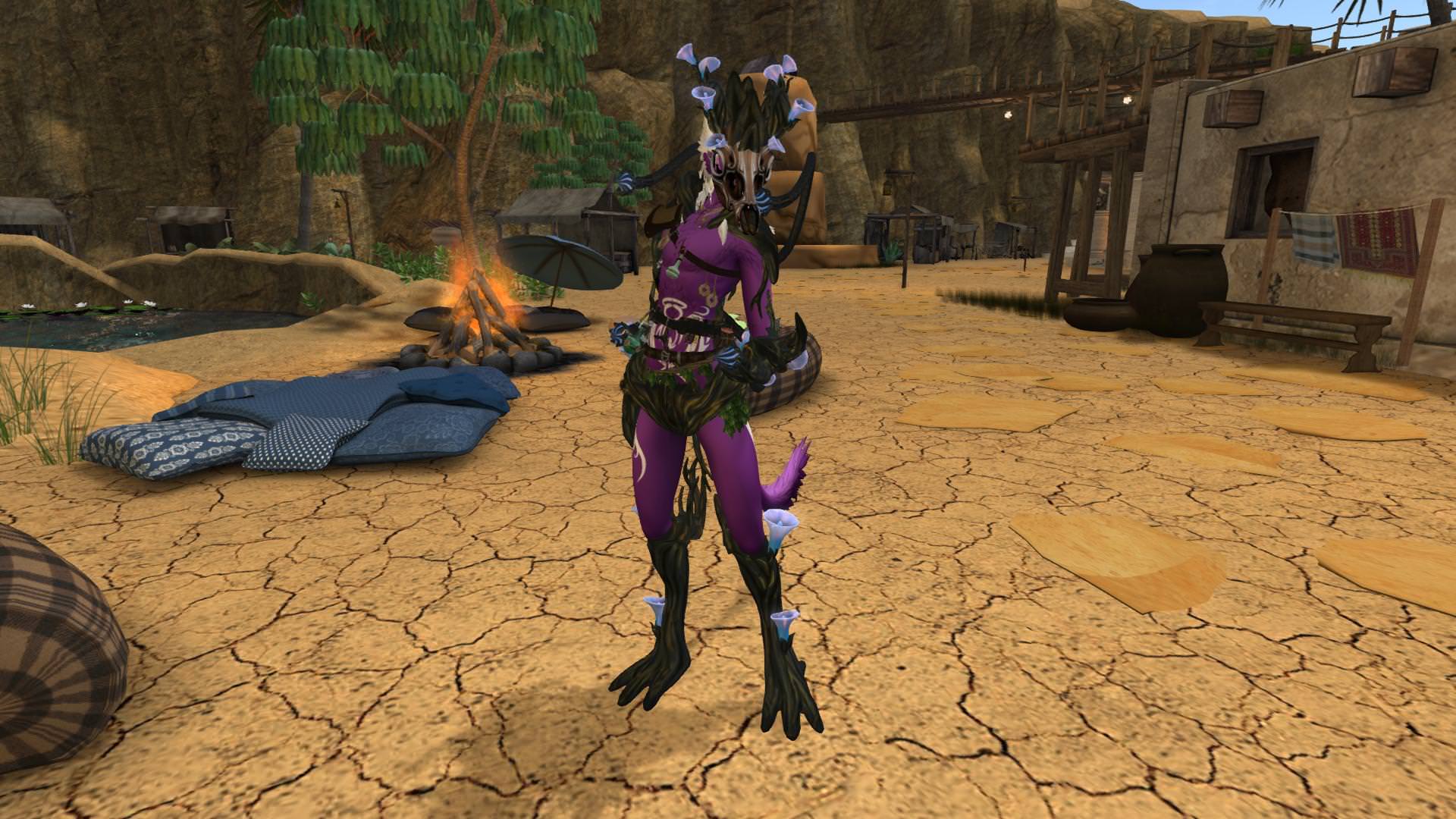 In late 2016 they had gained so much support that it was about time to start thinking about obtaining a full prim sim with talks of taking a different approach on what they were going to create on it. There were several different ideas that were shot around, but they stuck to keeping the village true and true, but making it much bigger than before, using every last square meter of the sim. Lot of the development that took place on the sim was extra housing for future rentals.

They tried to stay cost effective since getting a full-prim sim was still not viable until the near future. So, they had settled on a full-estate sim instead, which still catered to the need for more room, and had about an extra 2500 prims to use for much needed expansions to housing which was in such high demand at the time. However, that demand became so high that they realized the move to an estate sim still prohibited any further expansion since the rentals superseded anything else at that time. 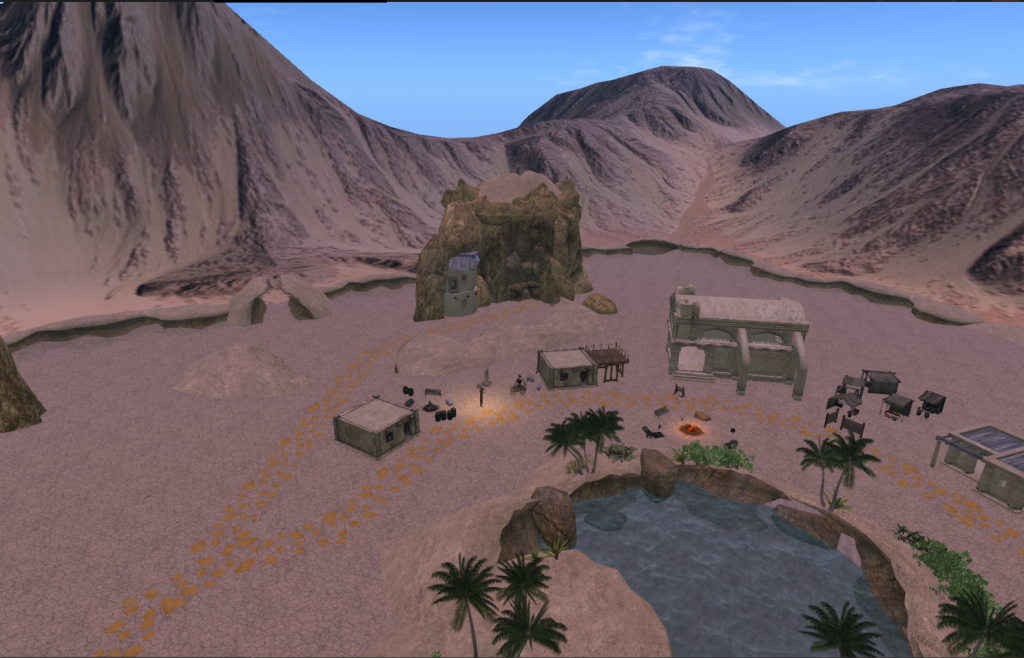 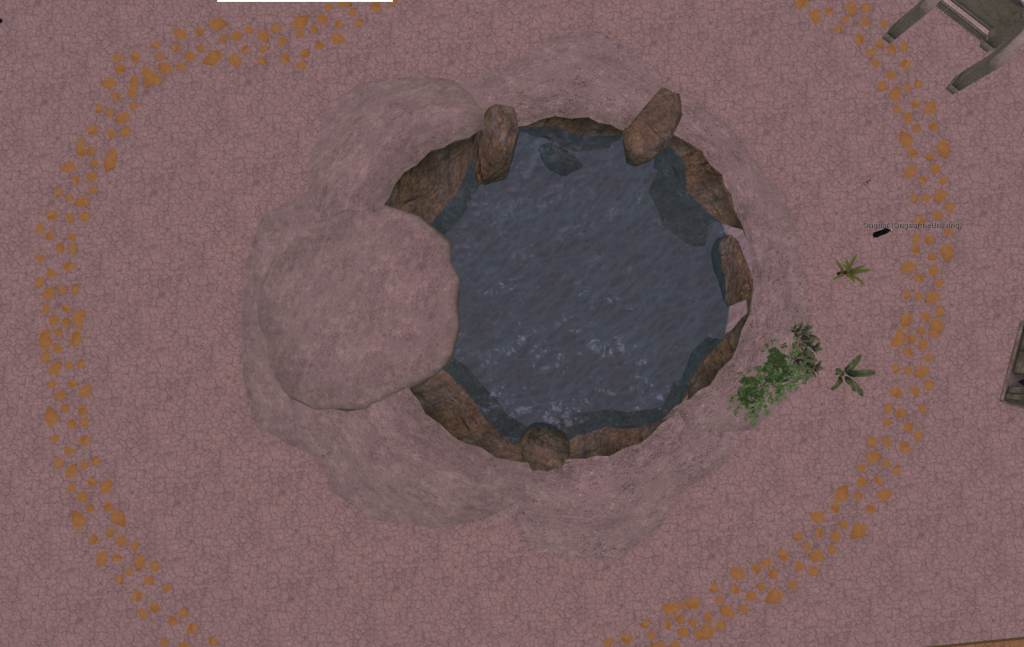 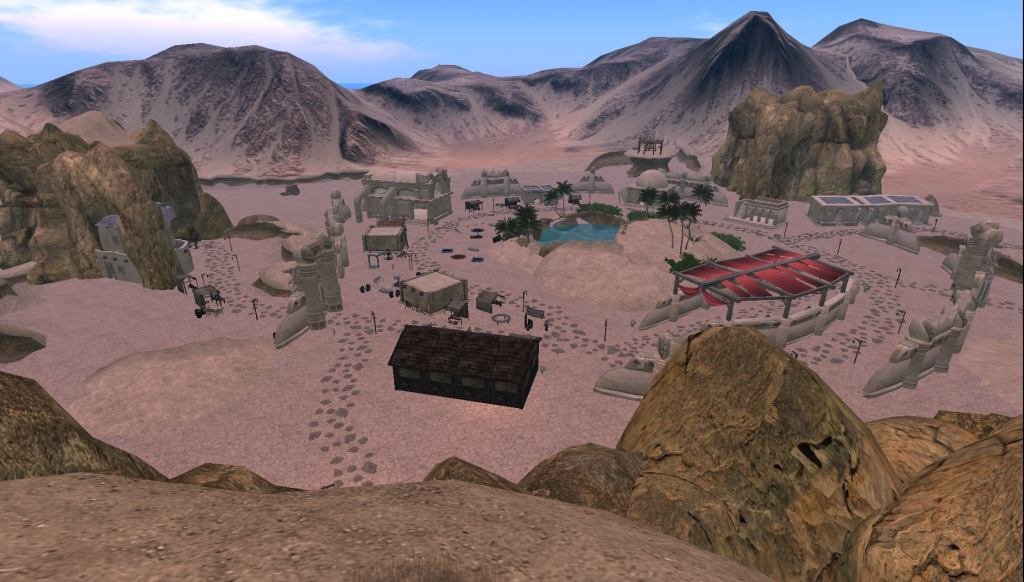 The sim had its ups and downs which really started to show through as activity began to drop pretty significantly through out the months. A lot of which started to pick back up again with adding newer structures such as the board game lounge, which they knew was not anywhere near the established canon, but it was more so to keep people engaged as the sim really became a huge hangout as not much roleplay really took place. They also revamped some unused housing around the sim with “dummies” (pre-furnished homes, low prim) which freed up some primage to use for slight expansion within the sim since the sim was running very low on space.

The sim kept a float for about two years to where it stands now. In the beginning of this year, they had talked about getting a full-prim sim, and doing an entire over-hall. Which meant the village would shrink to the size it was during its initial stage back in 2015 as they begin their major project. That will definitely shine through any attempt ever done on SecondLife to show case a good part of Gold Ring within the sim.

The project has taken a few months to actually get going, and the time frame of it actually being completed is…..

In the middle of December of 2018 they had finally decided to go ahead and purchase a full prim sim to undertake the Gold Ring project. The overall goal was to get the sim purchased and to start modeling immediately to try and get the sim fully furnished and developed before the start of the new year and open it to the public.

Stage I consisted of getting the center of the marketplace set before assessing where to place the rental plots. After that it was just a matter of getting the sim filled up with what they could think would be fitting to theme as they were still working on models to place onto the sim such as the Monolith, sim surround, and the Government building.